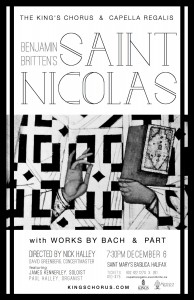 Benjamin Britten’s Saint Nicolas cantata brings the legendary 4th century Greek Saint Nicholas, Bishop of Myra, to life. Also known as Nikolaos the Wonderworker, because of the many miracles attributed to him, it is not surprising that Nicolas’s remarkable life served as the model for our modern-day Santa Claus.Britten’s setting is a dramatic one, with music that is as exciting and astonishing as the story itself (with libretto by Britten’s friend, theatre director Eric Crozier). The music calls for multiple choirs, strings, pianos, percussion, and pipe organ, all placed throughout the building…and two audience participatory hymns thrown in for good measure.

This concert commemorates both the day of Saint Nicolas (December 6th) and the centenary of Benjamin Britten’s birth. The first half of the concert features music ranging from the stark O Immanuel of contemporary Estonian composer Arvo Pärt, to J.S. Bach’s powerful cantata Nun komm der Heiden Heiland.